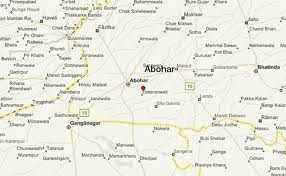 The ancient city of Abohar is situated in the district of Fazilka, which is close to the national boundaries of Rajasthan, Punjab and Haryana, and the international boundaries of Pakistan. As the city is positioned near the border of three different states, one can find a unique blend of different ethnicity, cultures and civilizations in this historic region. As one enters Abohar, one can see the remains of the erstwhile city of Abu Nagar, which existed 550 years ago and now lies buried under a big mound of sand and stones.

Abohar: Past and Present

The city founded by Abheraj Bhatti, dates back to 12th century. Initially known by the name of Abhegarh (Abu Nagar), the city was ruled by King Aabu Chandni centuries ago, after which Raja Hari Chand took over the reins of the city. It is said that during his rule, the king became very sick, and the doctors said that he will recover only if his body was rubbed with the blood of the horses owned by the Panj Peers (Five saints) of Multan. The king’s daughter immediately went to the Panj Peers and bought 81 horses. However, before his daughter could reach the kingdom, the king died.

After this, the Panj Peers requested the princess to return the horses, which she refused to obey. At this they got very annoyed and using their divine powers, they destroyed the region completely. Till date one can view the extensive remains (known as ‘Theh’ locally) of the historical city of Abu Nagar. This city also experienced lot of bloodshed during independence in 1947 due to Hindu-Muslim riots.

Today, Abu Nagar is known as Abohar. It is a Municipal committee and is located in the southwestern region of Punjab. The soil in the city is very fertile, and the main crops that grow here are wheat, rice, cotton and fruits like Malta and Kinnows among others. Agriculture and agro based industries are the main sources of income for the people here.

Geography and Climate of Abohar

Abohar is the largest city in the district of Fazilka in Punjab. It is situated southeast of Fazilka district and northeast of Sri Ganganagar. River Satluj flows by the side of the city.

Abohar is blessed with fertile soil, natural landscape and abundant water. Due to the above reasons, and also because the city grows a fruit by the name of Kinnows, which is from the orange family, the city is also known as the "California of Punjab”. It is also the largest producer of cotton in North India.

Abohar faces extreme climates. It is very dry and hot during summers - June being the hottest with temperature around 46-50°C. Winters on the other hand, are very cold and mostly dry with the temperature dropping to as low as 2-0°C. The average annual rainfall is around 410 mm.

The best time to visit Abohar, is throughout the year with the exception of May, June and July, when the weather is very hot and dry.

Abohar tourism has a lot to offer to the visitors as well as the residents here. It is mainly a place for the pilgrims with many Gurudwaras, Hindu Temples and shrines of Muslim saints adorning the region. Some of the famous places of pilgrimage are Shiv Mandir, Gurudwara Singh Sabha, Gurudwara Nanaksar Tobha, Nav Durga Vaishno Mandir, Shri Balaji Dhaam, Sri Sai Mandir, Gurudwara Bad Tirath Sahib and Johri Mandir.

For recreational activities and long walks, one can visit Abohar Wildlife Sanctuary, which is spread across a vast area and is being managed by the Bishnoi community. The sanctuary is a treat to watch. The main attraction there is the Black Buck. One can also visit the beautiful Nehru Park and the only public stadium in the region, which is situated in the heart of the city. Tourist can also enjoy the popular local dance "Jhumar" when in Abohar.

Although not a shopper’s paradise, Abohar and the other places of Fazilka district is famous for handmade shoes called Jutties. Jutties are made of leather and are available with curved and uncurved front ends. One can choose from various options of colorful and handmade embroidered Jutties. Visitors can get an insight into the local life and the hustle-bustle of the city by visiting the market area located mostly in street number 9, 11 and 12. 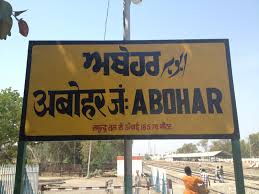 Abohar is well-connected to the states of Haryana, Punjab, and Rajasthan and to all the other major cities in North India. The main mode of transport is Railway and Bus. The nearest railway stations are Sri Ganganagar and Bathinda Railway Stations.

Abohar does not have an airport. The nearest airports to the city are Amritsar Airport and Sahnewal Airport of Ludhiana located at a distance of 235 km and 226 km respectively. Apart from buses and railways, one can also avail taxis, auto rickshaws and cycle rickshaws to commute within the city. The new flyover between the college road to the Municipal bus stand has made the mode of transportation within the city easy.